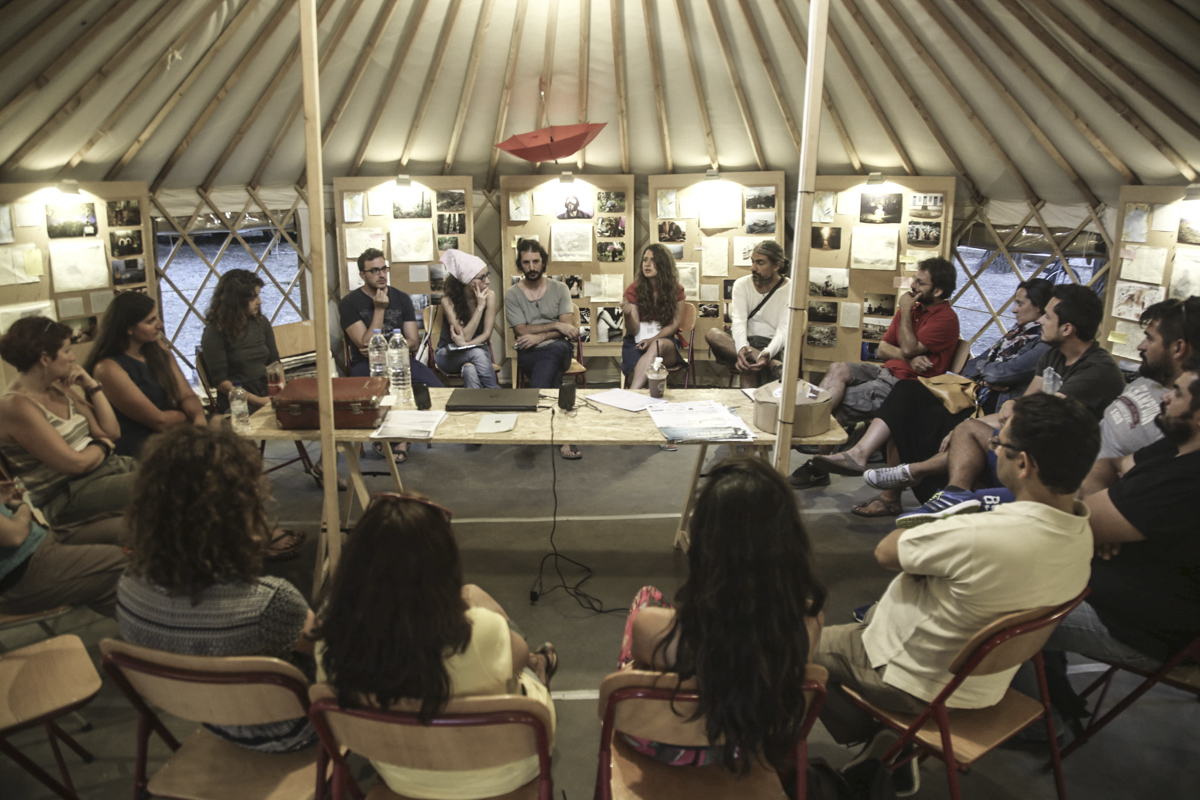 A series of lectures from professor Maria Daskalaki  & Dimitra Vladimirou to Kingston University, London and Goldsmiths, University of London regarding Spacing-Timing Process and Community Organizing, reflecting on the cultural activities of caravan project from 2014 to 2016.

In this paper, we draw from our ethnographic work with the Caravan Project, an artistic community of nomads who are currently conducting a journey around towns and cities, temporarily inhabiting urban vacuoles and co-creating temporary spaces for civic engagement. We view the Caravan as a mobile space, a meeting of ‘trajectories of stories-so- far’ (Massey, 2003). Thus we employ a performative and reflexive use of space: space as an encounter of unfinished stories. Exploring intersecting heterogeneities, the paper attempts to make visible the potential that makes socio-spatial practices not only story-spaces of engagement but also engaging places where re-configuration of organizing may occur. We will propose that the co-construction of temporary sites of engagement occurs when stories become territorialized and re-territorialized across space-time. As a result of this, story- spaces become entangled, co-constituting territories for collective creativity and action.

The Case Study: The ‘Caravan Project’

The case of an artistic, cultural initiative namely, the Caravan Project is employed as a temporary space of civic engagement in which community interactions and reflexive learning can be studied. The Caravan Project is a nomad who, by occupying temporary spaces, reterritorializes artifacts and relationships co-creating ‘temporary autonomous zones’ (Bey, 2011). The Caravan is currently in a journey around Greece where they create pop-up creative spaces of engagement in yurts situated in public spaces for one month per location. Evidently, audience engagement is a key component in a process during which newly co- constituted spaces attain a transformative capacity. This paper reports from studying this project while on the move. Using the Caravan documentaries as a tool, stories are shared in pop up creative incubators in order to enhance community engagement, creativity, collaborative problem-solving initiatives, civic engagement, community collaborations and new forms of organizing.

Through the use of film and storytelling, the Caravan Project engages in community action and social dialogue. The co-production part refers largely to the social aspects of the process, particularly to the use of the films to initiate community engagement and involvement and identify problems and solutions. Each story co-creates a unique untold story milieu through connecting with other stories, the performance of which initiates a process of hermeneutic play. Through this process, the stories become open to diverse perspectives and subject positions. Story enactments do take place every time they are played in diverse audience/communities yet always remain open, incomplete and undecided in anticipation of their next performance. Hence, the focus here is shifted to the importance of the platforms of transformational creativity through which these stories are replayed and received, a collaborative space of audience, storytellers, contexts, art and digital media.