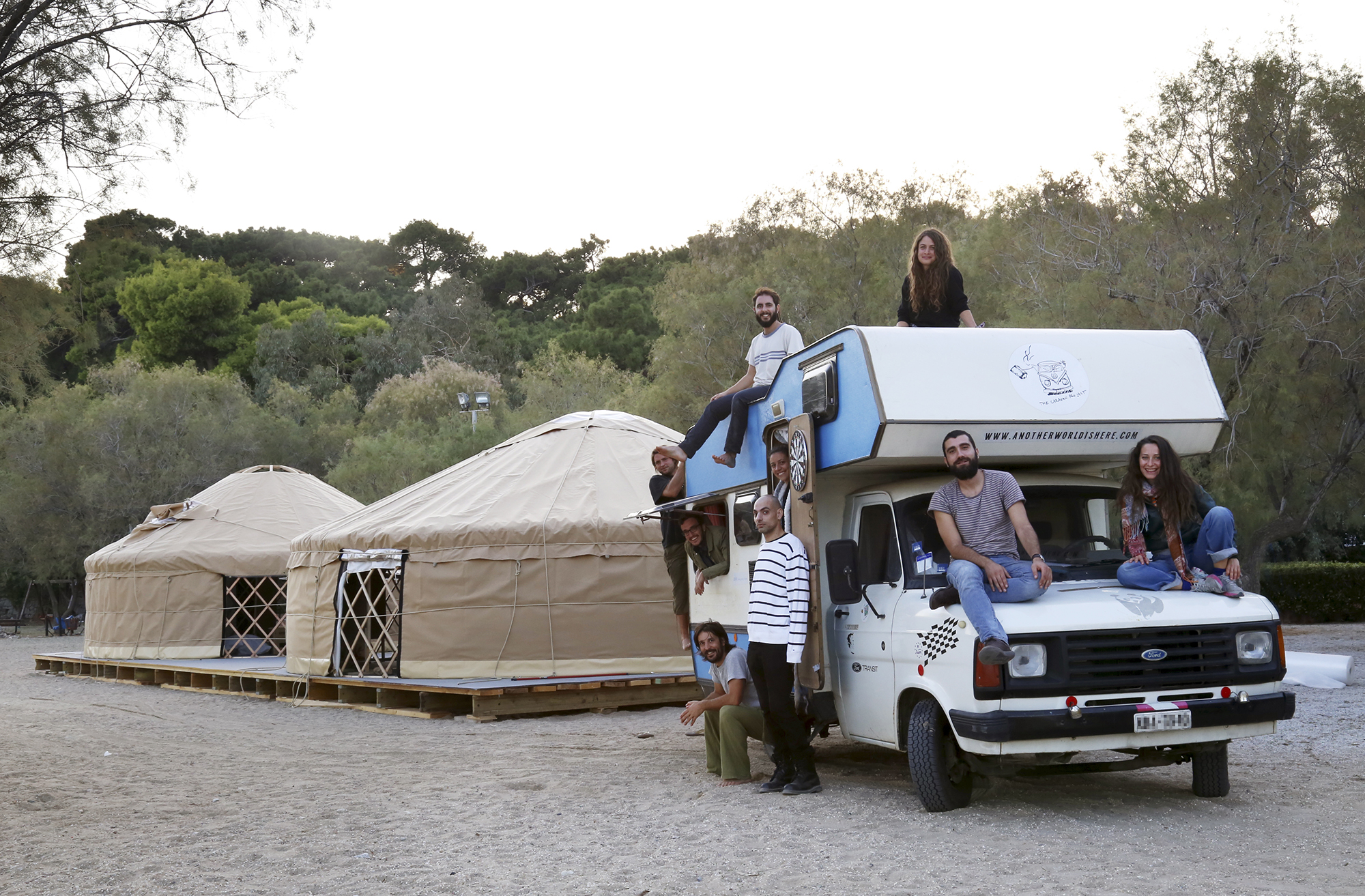 «Tell Me a Story“, Written by Theresa Wiedemann

Crisis, debts and credits are the issues nowadays permanentely related to Greece. In a capitalistic system completely focussed on money, the public discourse tends to forget about the people behind the bank accounts – especially in Greece, where poorness spread widely and suicide rate quadrupled during the past years. A group of young media artists and arts managers feared people’s stories getting lost while being annihilated amongst world politics. Four years ago they launched „The Caravan Project“ in order to save them.

He is sitting in a small tent, a cat tampering the dried up rests of his food in a pot. He paints blue pictures and writes down jokes sometimes, when he has some time left for it. Massimo is a homeless from Ethopia living in a neighbourhood in Athens, sometimes happily, sometimes angrily. In the evening hours he stands next to a busy highway, his eyes fascinatedly aligned to the sky and tells the camera „Look how beautiful it is! Look at it!“.

His portrait is just one of the stories Stratis Vogiatzis and his around 15 colleagues have been collecting so far while travelling Greece. In an old camper and equipped with two circuit Mongolian yurt tents they visit cities and villages. The team of the Caravan Project holds screenings on squares, in schools and prisons all over the country. They show exhibitions of the material they have collected before and offer community actions related to important local issues in every area.

But above all, the young Greeks make their countrymen talk. They encourage school kids to elaborate their thoughts and ideas, they ask the old boatbuilder for his experiences and zoom into a Social Conservatory in Athens where volunteers teach interested people in playing instruments for free. By only using the stimulus „Tell me a story“ the Caravaners create short films and documenting photo series which they are publishing in a digital story bank.

Like this the „Caravan Project“ develops a unique possibility to gain insights in a society that is being reduced to numbers and amounts of money in Western media lately. To the initiators of the project stories are brigdes, „designed to help us overcome our isolation and to reunite with the world and our fellow human beings“. Stories in their sense can be told by everyone, by your son, by your neighbours and by the ones living on the edges of a society. Their aim is to visualise what the other’s life is like and to foster understanding between members of a crisis-shaken society.

The Caravan Project suggests – just like other social ideas as for example a spanish village putting social economy into practice – that the solution of major problems can be hidden in very small structures sometimes. Their undertaking is an approach to strenghten mutual solidarity and civic integration by focussing on individuals and the things they have to tell. The „Caravan Project“ is empowering Greeks here and now to stay together during hard times and to pay attention to the ones living besides them, always sticking to their slogan „Another world is here“.