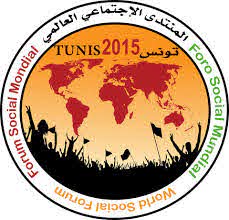 At least 70,000 participants, representing more than 4,000 mass-based movements and organisations and an amazing diversity of people from all over the globe, have taken part in the 14th edition of the World Social Forum (WSF), that took place in the Tunisian capital, Tunis.The five-day event served as an annual counterweight to the Davos World Economic Forum, where top political leaders and business elites meet to discuss economic issues. Set on the campus of El Manar University in the capital Tunis, thousands of participants were milling among tents, stalls, workshops and seminars debating about key issues of our times and how to achieve social justice at local, national, regional and international levels. The event provided mosaic of youth and labour unions, environmental and peace associations, as well as various communities and activists from across the globe. It offered a space to put forward alternative ideas for a better society based on the principles of equality, reciprocity and solidarity.More than 200 cultural activities were on display in Tunis as part of the event. They include exhibitions, alternative media fair, film screenings, street performances and music concerts.

Recently, Judith Butler (2012, interview) explained how most of the time a dependency discourse is employed to promote colonial and paternalistic political rationalities whereas inter-dependency normally points to forms of organization characterized by equality. Yet, at the same time, an autonomous subject with no needs, according to her, is a problematic idea; it breaks social bonds promoting a form of false individuality governed by denial and destruction. Hence, inter-dependency is not only inevitable but also necessary for constituting a broader field of social signification and more importantly, mechanisms of self-definition and human survival. However, the current inter-dependency brought about by the latest of the stages of capitalism is not quite the one that Butler would have hoped. They are not characterized by relationships of equality and essentially constitute immediate threat to the values of solidarity upon which European democracy has emerged and formed. A rediscovery of our sociality and inter-dependent human condition is thus required.

The so called global economic reforms against debt, pushed down through state monetary policies (austerity measures) are capitalist forces that aim to transform the living conditions of the majority populations, their standard of living and their social relations and meanings; the resultant unemployment, poverty, deprivation and social inequality are expected to have a direct effect on the psychological aspects of individuals, definitions of selfhood, relationships with the self and others as well as the collective definitions of culture and society. We want to explore and try to interpret these new forms of social interdependence and collective rediscovery; in particular, we discuss how the affected individuals and communities in the crisis and austerity contexts (namely Greece) experience these transformations on their everyday lives, their thoughts, feelings, emotions, actions and re-organization initiatives by accessing the stories they tell about ‘their own, embodied crisis’. Through that we hope we will give a voice to the marginalized, often voiceless subjectivities that despite the fact that they constitute the communities that are currently being challenged, reshaped and transformed remain rather underrepresented in the academic accounts of the crisis.

Boje (2007, 2011), Gabriel (2002; 2004) and Czarniawska (2002; 2004; 2006) have provided a range of methodological resources for exploring such a dynamic, inventive complexity of narrative and/or story. Our use of stories here is on a philosophical and methodological basis. That is, our inquiry centres on projects like the Caravan that can contribute to our knowledge of individual and social experiences (in spite) of the crisis as juxtaposition to the typically flat, positivistic accounts that have so far centred on macro-economic analysis and survey-based reporting.

Employing a variety of media such as portrait photography, sound recording and powerful character-based short documentaries, The Caravan’s Project aims to diffuse everyday life stories suppressed by the established institutional discourses and bounded ‘realities’. We look for stories that deal creatively with resistance, people who continue to dream and celebrate diversity escaping the ordinary; people who are adventurous, subversive, disobedient and indeed have the power to take destiny into their own hands. This is achieved through the performance of alternative lifestyle philosophies, different realities, emerging social values, innovative collectives and new forms of organizing; these are the untold stories that we engage with in this project.